This season’s youth soccer clinic at The Center of Anna Maria Island ended in a fun game of parents versus players for the six-to seven-year-old group last Tuesday night. With Tim Holly, sports program coordinator for the community center, leading the adult team, the oldest of the clinic program players laughed and had fun against their parents in the game that transitions them to the big field.

Sponsored by Bridge Tender, Holly worked with the talented group of young players for six weeks on advanced skills that would prepare them for stronger competition in the next season in the 8- to 10-year-old recreational league.

For the younger Island area kids, The Center’s Associate Director Connor Haughey utilized the old baseball infield to introduce the youngest ballers to the game and basic skills of soccer. The three- to five-year-old clinic, sponsored by Diamond Turf, took to the small pitch during the last seven weeks to learn how to dribble, pass and shoot.

Each season, more children in the area fall in love with the sport of soccer and learn some of the basics on Anna Maria Island at The Center thanks to volunteer coaches, business sponsors and the staff at the community center. 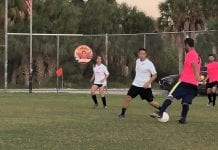