The Carters moved into their Anna Maria home in 2001. Carol’s departure will create an 11-month vacancy on the city commission to be filled by commission appointment.

Bob’s departure will create a vacancy on the city’s Planning and Zoning Board. In 2019, he and Dick York received Anna Maria’s Distinguished Citizen of the Year award for their work with the Home Rule Florida organization and website.

“Bob and I will be relocating in December to south Sarasota County for a quieter life – at 26 feet above sea level – nearer our sons and their families in Naples,” she wrote.

“It’s been an honor for me to serve and represent the residents of our city and Anna Maria since Nov. 14, 2013, when I was sworn in as a commissioner for my first two-year term. Now, five terms and almost 10 years later, I resign my position on the Anna Maria City Commission as of Dec. 16. If acceptable, my final commission meeting would be Dec. 15,” she wrote. 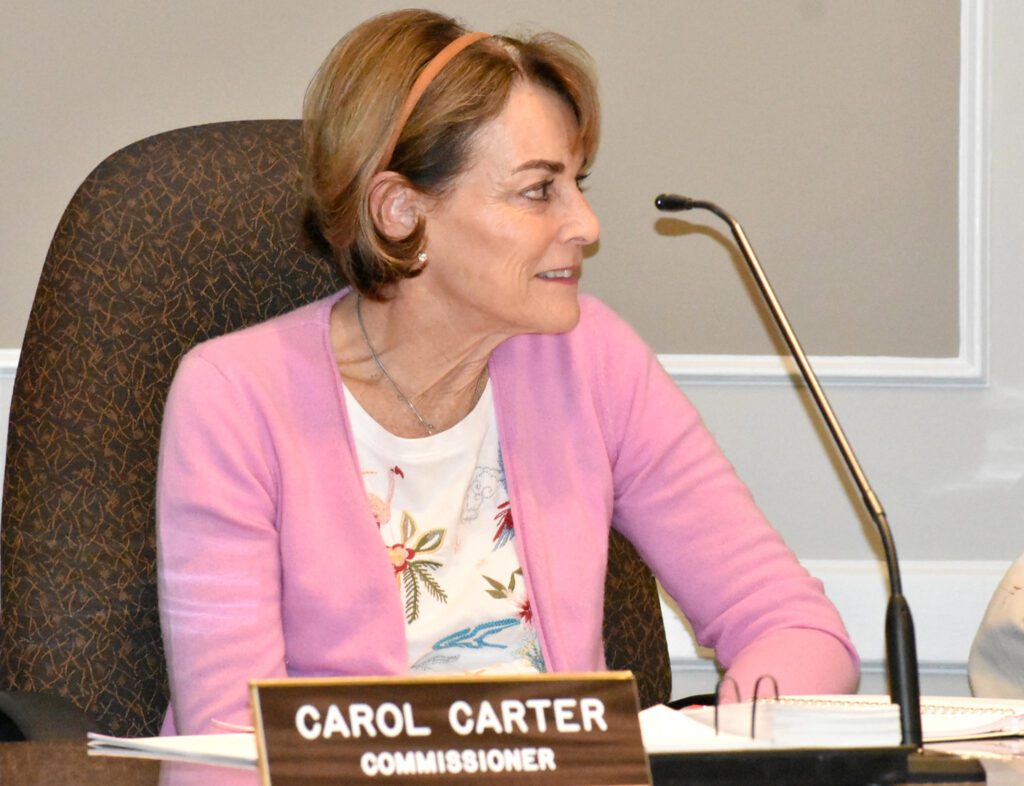 In December, Carol Carter will leave the city commission she’s been a member of since 2013. – Joe Hendricks | Sun“It is difficult to express how much this experience, with its responsibilities, has changed my life. I will forever value the trust relationships that have developed for me with my fellow elected officials and the Anna Maria city staff members both past and present. That learning curve of all the inner workings between local, county and state officials, our local ordinances, county and state laws and the indominable state of Florida Sunshine Law continued for all my years in office,” she wrote.

“Thank you, Mayor Murphy and commissioners Short, Crane, Sebring and Kingan for your support and confidence during our years working together for the greater good of our Island community. I hope I am leaving this special place better prepared to meet the challenges ahead,” she stated in her letter.

In his response to Carol’s resignation letter, Murphy wrote, “It is with a great deal of regret that we accept your letter of resignation. Thank you for all that you have done for our city and our Island community to make it a better place to live. You have left a positive and indelible mark on Anna Maria through your many contributions.”
On Friday, the couple attended the city’s “Old Soldiers & Sailors” Veterans Day parade and the recognition ceremony at City Pier Park. When asked about their pending move, Bob said he and Carol both grew up in rural areas and want to return to a more rural lifestyle.

“Carol and I have lived on the Island for over 20 years. We’ve really enjoyed it but as we look to where we want to spend the next 10 or 20 years it’s going to be in a more peaceful place. We’re looking at five acres out east in south Sarasota County. We’ll probably have a few animals and invite some of our friends from the Island to come to our ‘petting zoo,’ ” Bob said.

“We’re really looking forward to this chapter of our lives together. We will miss the Island and we’ll be happily and peacefully watching from the sidelines. When we bought here this was a very different place. It was over 70% residential then and now we’re in the low 20%. That was fine for the period that we were here, but we’re looking forward to a new chapter in our lives together. We have friends in Sarasota and I’m still within 27 minutes of my office in Sarasota,” Bob said.

When contacted later in the week, Carol said, “We look forward to the next phase of our lives and changing gears for the next 10-15 years if we’re fortunate and our good health continues. I’m 75 and I think it’s time to regroup and do some different things to keep me invigorated,” she said.

As a soon-to-be-resident of unincorporated Sarasota County, Carol doesn’t anticipate running for a county commission seat, but she may volunteer to assist the county government in some other fashion.

She also hopes to get involved with the Conservation Foundation of the Gulf Coast, working on wetland and land conservation and preservation.

“I come from an agricultural background and I hope to get more involved in that type of thing,” she said.

The couple has joined the Church of the Redeemer Sarasota and they plan to get involved in some of the many endeavors taking place there, including the ongoing Hurricane Ian recovery efforts that include repairing and replacing damaged homes and churches. Carol said the church has also helped displaced Afghan refugees get settled in southwest Florida.

“They have all kinds of outreach activities that I’m going to get involved in. I think it’s important to stay active and I want to do that, reinventing myself for the next 10-15-20 years,” she said.

Carol was asked what she’ll miss most about living in Anna Maria.

“I certainly will miss the involvement representing people in our city and having them come to me with issues that are important to them. I’ll miss being a commissioner and working with the constituents. I also miss riding my bike or walking up the street to Ginny’s and Jane E’s to have a cup of coffee or tea and chatting with people I know. I’ll miss going to the community center too,” Carol said.

Carol was asked if there’s anything she won’t miss about living in Anna Maria.