I don’t think it’s a stretch to call where we live paradise. I hear first-time visitors say that all the time. Many, including me, never leave and that’s part of the problem that can and needs to be part of the solution. 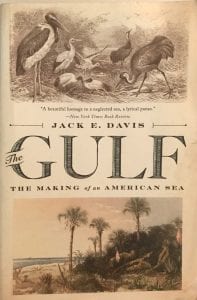 When I read Jack Davis’ book “Gulf, The Making of an American Sea,” I was amazed to learn what a paradise this was at one time. After reading Davis’ book, one might at first change their opinion of the area to “paradise lost” if not for the message of hope that it portrays. Consider the fact that some areas of the Gulf coast including Tampa Bay at one time had lost over 80% of their vital seagrass habitat. That was due mostly to wastewater discharges from sewage plants and dredging for ports and residential waterfronts. Today the seagrasses have recovered to almost historical levels. That’s the good news; the bad news is that the trend is starting to reverse. That’s concerning, especially when you consider that some 2.3 million people live in the counties bordering Tampa Bay (including Anna Maria), nearly six times the 1950 population of around 400,000 people. The current population has increased by 13% in just 10 years and is projected to increase at a faster rate.

That’s why I was attending Suncoast Waterkeeper’s yearly fundraiser, “Brunch for The Bay,” on Sunday, March 8 at the Bradenton Yacht Club. Suncoast Waterkeeper (suncoastwaterkeeper.com) is a Sarasota-based organization that is leading the way in helping to hold polluters of our coastal waters accountable. Davis was the event’s guest speaker and his talk echoed the message of the book. If I had to sum it up in a few words it was there’s hope, but only if the people who call this paradise home get involved. That’s just what Suncoast Waterkeeper’s “Sick of Sewage” campaign is doing. In the last three years the organization, founded by environmental attorney Justin Bloom, has successfully filed lawsuits holding municipalities including Sarasota, St. Petersburg and Safety Harbor accountable under the statutes of the Clean Water Act.

The problem now is the aging infrastructure that has resulted, in Sarasota County’s case, in the release during the last decade of over a billion gallons of partially-treated, nitrogen-rich wastewater into Philippi Creek and Sarasota Bay. When confronted with the issue, the county did the right thing settling with the stipulation that they would convert to an advanced wastewater system and contribute to organizations like the Sarasota Bay Estuary Program that work to enhance and protect the bay.

One of the big takeaways I got from listening to Davis speak was that we should all refrain from using the term red tide and instead refer to it as what it is, a harmful algae bloom. The term red tide has been used to dismiss these devastating events as natural and therefore attempting to absolve those responsible for the increased nutrients that have led to over a 500% increase in the number of blooms, their intensity and duration since 1950. That’s a number directly proportional to the population growth, according to marine researchers.

The take-home message was that we all need to get involved in protecting paradise. The solution begins at home by limiting the use of fertilizers and pesticides and eliminating grass on our lawns. At the same time, we should all support groups like Suncoast Waterkeeper, which are holding polluters accountable, initiating water testing in public waterways used by the public and committing to environmental education. The same goes for Sarasota Bay Watch, an organization with plans to release 1 million clams in the bay in 2020 that work to clean our waterways and bay islands. Their motto, “A Healthy Bay is Everybody’s Business,” rings true. Paradise lost should never be an option.