HOLMES BEACH – Commissioners are considering amending the city’s sign ordinance to allow hotels and motels in the A-1 residential area along the beach to have lighted signs – just not the kind that one hotel owner wants.

Attorney Stephen Thompson, representing the owners of the Anna Maria Beach Resort, appeared before commissioners during a January meeting to ask commissioners to consider changing the sign ordinance. His clients installed an interior lighted sign with an LED message board and a neon-lighted sign on the overhang at the entrance to the resort in mid-2019 with a building permit from then-Building Official Jim McGuinness.

City leaders realized the permit was issued in error because lighted signs aren’t allowed in the A-1 district where the resort is located, and revoked the permit, requiring the signs to be removed.

The matter went before the city’s special magistrate in September. The magistrate ruled that the signs could remain but they could not be lit and the LED message board should be removed.

Mayor Judy Titsworth suggested only allowing a reasonably-sized painted wooden sign or similar sign that is lit externally by a single landscaping spotlight, in the same manner that other hotels in the district use for their signs. She said having signs lit in this manner would be visible to motorists and allow them to safely see where their hotel is and mark the entrance and exit to the property but not be bright enough to disturb residents at adjacent condominium properties and residential homes.

“It’s just to find the hotel,” she said of the signs.

City Planner Bill Brisson asked commissioners for time to research how many resort properties are in the A-1 district, if they have any lighted signs and what type of lighted signs might be best in the area given the number of residential properties. He said that he expects it will be March before he has a draft ordinance ready to put before commissioners for discussion. He added that he feels the resorts should be allowed to have some sort of illumination but that the owners should be sensitive to the surrounding residents. Another concern is how lighted signs on Gulf Drive will affect sea turtles during nesting season.

The one thing city staff and commissioners agreed on is that the draft ordinance submitted by Thompson won’t work.

“We have to start from scratch,” Building Official Neal Schwartz said of the ordinance changes. “There’s no way we’re letting commercial signage go in that district.”

Stormwater fees on the rise in Holmes Beach 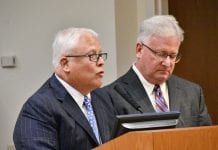