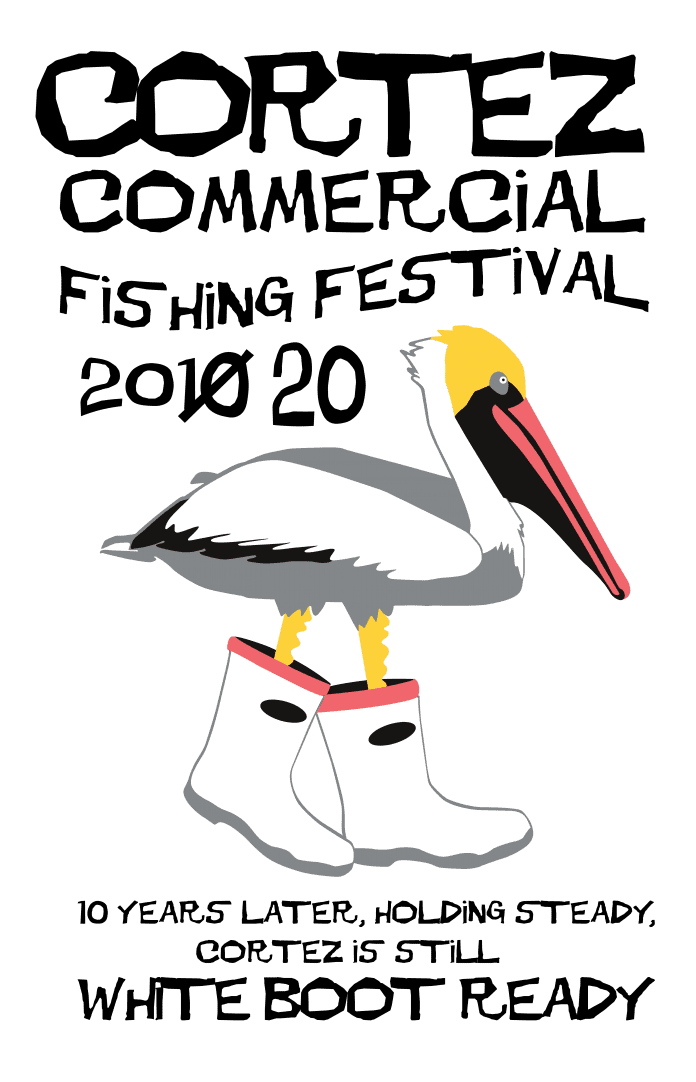 CORTEZ – There’s something old and something new at the 38th Annual Cortez Commercial Fishing Festival, Feb. 15-16, from 10 a.m. to 6 p.m. in the historic fishing village.

Where: Enter at the Florida Maritime Museum, 4415 119th St. W., Cortez or the FISH Preserve one block east

Why: Support the FISH Preserve

And there’s something new this year, which is actually quite old – recordings from NOAA’s Voices from the Fisheries, part of the Vanishing Culture Project, will run continuously during the festival. The project aimed to preserve vanishing cultures like the Cortez commercial fishing culture, and includes music by the Cortez Grand Ol’ Opry and interviews with the likes of commercial fishermen Blue Fulford, Walter Bell and Albert Mora, fish house manager Karen Bell, musicians Goose and Richard Culbreath, local historian Doris Green and many others.

This year’s logo is also both new and old; “10 Years Later, Holding Steady, Cortez is Still White Boot Ready,” hearkens back to the festival’s most popular T-shirt, picturing a white pelican wearing white fishing boots that dates back 10 years to the 28th festival.

The festival won’t just be a great weekend event, it will help support a great cause – the FISH Preserve.

The Florida Institute for Saltwater Heritage (FISH) has been purchasing the 100-acre preserve a parcel at a time for four decades, systematically clearing the land of invasive, non-native vegetation like Brazilian peppers and Australian pines and planting mangroves and other native plants.

Bordered by Sarasota Bay to the south, Cortez Road to the north, mobile homes to the east and the fishing village of Cortez to the west, the restored mangrove wetland habitat was once an unofficial trash dump, with old tires, large appliances and even boats that FISH has removed.

FISH also was recently able to purchase a problematic parcel in the middle of the preserve that threatened to break up the preserve if the owners had built a planned home there.
Festivalgoers who park at the FISH Preserve parking area will get a glimpse of the habitat restoration in progress.

The Boy Scouts – who have built footbridges in the FISH Preserve to provide access to the interior of the preserve – will offer on-site parking for $5 at the FISH Preserve, located one block east of the village off Cortez Road. A park-and-ride shuttle is available on an MCAT shuttle bus for $3 round trip from two locations, G.T. Bray Park, 5502 33rd Ave. Drive W., Bradenton (turn east off 59th Street onto 33rd Avenue Drive) or at Coquina Beach in Bradenton Beach on Anna Maria Island. On Saturday only, a free park-and-ride shuttle will be available from the Cortez Baptist Church, 4411 100th St. W. on Cortez Road, 1 1/2 miles east of the festival.