ANNA MARIA – Despite a steady rain, the city of Anna Maria’s Holiday Carols in the Park started with a bang, when Santa magically appeared through a cloud of orange smoke at the west end of City Pier Park.

The annual city-sponsored holiday event took place on Friday, Dec. 13 and began at 4 p.m.
After making his way to the shade sail structure to the delight of the awaiting youngsters,

“Hopefully next year we’ll have more entries. It was a lot of fun,” Kinder said when
the judges were introduced.

“I want to thank all of our businesses for entering, you did a fantastic job,” Murphy
said.

Santa then opened the hermetically sealed envelope and announced Duncan Real
Estate won the business category. Sales and rental agent Joey Hutchinson accepted the trophy on behalf of Duncan Real Estate, but he said most of the credit
goes to rental agent J.P. Beaubien.

“He did all the work,” Hutchinson said of the decorations gracing the real estate
office on Pine Avenue.

For their home on Gladiolus Street, Santa announced the Craft family as the winners of the residents category. Santa and the mayor then presented Larry Craft with his lighted, Christmas tree-themed trophy.

“I give the credit to my wife (Carol). She’s truly a Christmas angel, and I am her wing man. I didn’t do that much; she did most of it,” Craft told the crowd.

“Beautiful job,” Murphy said. “And thank you, everyone who entered.”

Santa then made his way over to his special chair so the children could share their
Christmas wishes with him and receive the gift bags he had for them.

Standing under an auxiliary tent and accompanied by a talented keyboardist, the
choir from the Roser Memorial Community Church performed several Christmas
carols, including “Away in the Manger,” before asking the crowd to join in a holiday
sing-along that included “Joy to the World” and “We Wish You a Merry Christmas.”

Attendees were also treated to free eggnog, Christmas cookies and other refreshments.

After performing with the choir, Lorna Smilde was among the grown-ups who paid Santa a visit. When asked what Christmas wish she shared with Santa, Smilde said, “I want
peace in this country.”

After the performance, Murphy shared with The Sun his thoughts on the festivities.

“With all this rain. I was surprised that we had the great turnout we did. It just shows
you the holiday spirit is alive and well in Anna Maria. I’m very pleased and I’m very
proud of what the city staff put together for this celebration.” 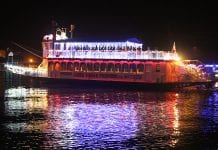 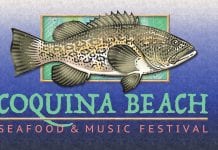 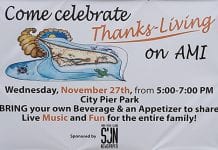