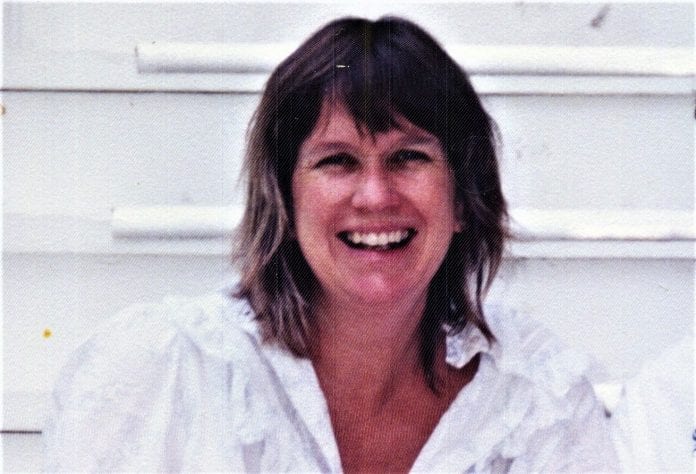 By Katie Field and Maureen Gallagher |

Maggie McGinley-Field was born on December 17, 1959 and grew up in Barrington Hills, Illinois. She attended Countryside Grade School and Barrington Hills High School. She lived in Lake Geneva, Wisconsin in the summers. She was her father, Bill’s, daughter to the nth degree and a natural athlete, learning tennis, golf and horseback riding at a very young age.

Maggie always wanted to follow in the footsteps of her beloved older brothers, Robert and Jimmy. Maggie met her friend Maureen, who would later become her children’s godmother, at the tender age of 8 years old.

Under Bill McGinley’s watchful eye, the two became inseparable horseback riding pals. They took the bus after school to ride their ponies, Wizard and Blue Duke. So many marvelous adventures ensued throughout Maggie’s youth, from seeing Secretariat at Arlington Park to snowmobiling with “Wild Bill” to boating on the Firecracker with Shannon & Sheila O’Brien and sailing and winning tennis championships at the Lake Geneva Country Club. Maggie was also infamous for the high school campouts she coordinated as soon as she was old enough to drive her blue Chevy Blazer, lovingly passed down to her by father.

Maggie loved her dogs Middy (Midnight) and Murky Mud, as well as Tilly, Annie, Angie, and most recently, her famous bichon and beloved companion, Timmy. Maggie was a friend like no other and the most loyal person to those who were lucky enough to call her friend. Maggie had an indomitable spirit and a great love of nature and animals, which she carried with her throughout her life.

In work and in art, Maggie was a devoted newspaper woman and photographer. She attended the University of Miami and graduated with a degree in photojournalism and worked for the Miami Herald, the Miami News, the Associated Press and United Press International.

Maggie was a serious photographer during a time when shooting photos for newspapers was largely considered a man’s trade. She often told stories of the mischievous and various ways she got and held on to her sometimes dangerous jobs – such as challenging her male editors to rounds of golf and winning, carrying a gun or traveling with a bodyguard to make sure she could get the grittiest shots of 1980s Miami streets. She excelled at lending her artistic eye and passion for storytelling to scenes of gore and heartbreak – scenes that would go on to haunt her for decades. She loved to reveal the textures of Floridian lives, and she covered everything from car crashes to protests and the AIDS epidemic, as well as rock concerts by the Rolling Stones, The Who and Jimmy Buffett, just to name a few. She was especially proud of her work as a sports photographer, shooting professional golf, tennis, football and baseball. She often said the nicest sports figure she ever met, and the one who treated her with the most respect, was Don Shula, coach of the Miami Dolphins.

Maggie’s career then took her to Tampa, where she met her husband and sometimes editor, Mike Field, in the late 80s while working at the Tampa Tribune. The two became fast friends and spent six years together in Tampa, sharing their mutual love of storytelling, athletics (she kicked his backside in golf every time of course), and connecting ever more deeply with the Florida landscape.

The pair eloped in 1991 and were married on the snowy tops of a mountain in Vail, Colorado, a place that would always remain sacred to them.

They moved to Anna Maria Island in 1993 in order to raise their first child, Katie. Maggie always spoke wistfully of the Island at that time – its natural beauty, strong community, sense of safety, and the thrill of making a home there for her family. She took hundreds of photographs of Katie, and later Connor, on Tarpon Street, the dead-end road that then boasted large plots of undeveloped land, numerous families with small children, and several working fishermen. Maggie adored her Island home and Tarpon Street neighbors.

In 2000, Maggie and Mike opened The Anna Maria Island Sun newspaper, which allowed them to record 20 years’ worth of history and life experience on the Island and which positioned Maggie, the whirlwind extrovert, as a small-town celebrity, a status which she loved and fled in turns.

Maggie raised her two children devotedly, pouring her all into giving them a charmed, beachfront childhood, and encouraging them to live as she did – generously, actively, and ever in pursuit of a story or a laugh. She passed her hobbies and passions on to them, teaching them to ride horses, to love animals, to listen attentively, and to always take care of other people.

She taught them a deep respect for always telling the truth, sharing what they have, and recognizing the day-to-day “angels,” as she called them, who make life worth living. She instructed them from a young age about how to carry a camera like a “real photographer” – with the strap on the shoulder, not around the neck, and that there was nothing so important as to keep a pen and paper on-hand at all times.

In recent decades, Maggie was shaken by the loss of her parents in the early 2000s, the recent loss of Island friends and characters, and by illness. The last 8 months were particularly hard for her, as her mobility became limited and her pain increased. However, Maggie did not lose sight of the deep love she held for her family and for this Island. She was brave and resilient until the end, and she went out as a tender-hearted fighter always in search of a dry joke and a bright side to things.

Maggie is lovingly remembered by her husband of 28 years, Mike; her children, Katie and Connor; her older brothers, Robert and Jim; her niece, Frances; her sister-in-spirit, Maureen; and the Island and Barrington communities which she so cherished. She will be missed dearly by the people whose lives she touched.

A Celebration of Life will be held at the Sandbar Restaurant, 100 Spring Ave., Anna Maria on Saturday, Nov. 16 from 3-5 p.m.