BRADENTON BEACH – City Building Official Steve Gilbert has the city commission’s support to issue a stop work order on a county drainage project that would remove at least 103 and possibly up to 232 Australian pines from Coquina Beach.

This comes in response to the Manatee County Commission’s 4-2 decision on Tuesday, June 18 to remove 97 more Australian pines from the south end of the Coquina Beach parking lot as part of the county’s drainage and paving project. Six pines already were removed earlier this month.

“I think they knew they were going to have to take trees out, they just didn’t divulge it. They didn’t tell us there might be an impact to the trees.” – Steve Gilbert, Bradenton Beach building official

“This would not be ‘Stop, halt, desist and take everything out.’ It would be ‘Take a break and let’s talk about this,’ ” Gilbert told the commission on Thursday, June 20.

Gilbert, City Attorney Ricinda Perry and the commission agreed to first extend the courtesy of putting the county on notice before issuing a stop work order that would bring the county project to a temporary halt.

The city’s land development code prohibits planting Australian pines and other non-native nuisance species, but the code requires replacing each prohibited tree removed with an allowed species on a one-to-one basis. City code also requires the replacement trees to be at least five feet tall.

“The city is hereby placing the applicant on notice that Manatee County must come into compliance with this Land Development Code. Please prepare and submit a plan showing the location of all trees to be removed in the project area, along with a signed/sealed landscaping plan to show the locations of the replacement trees, including a list of the tree species proposed. We will then amend the project application to include the landscaping plan,” Gilbert’s memo said.

“Please be advised that the Land Development Code authorizes the city of Bradenton Beach to stop work on a project when situations such as this arise, until sufficient information is provided to assure compliance with the code. Rather than take this action, my office would prefer that we collaborate on a solution. We ask that you take steps to prevent the removal of any trees until this matter is fully resolved. This is a matter of importance, and time is of the essence. We would like to meet with you as soon as possible to review the situation and the requirements,” Gilbert’s memo concludes.

“If you’re taking out 240 trees you will replace them with 240 trees,” Gilbert told the Sun earlier in the week.

“I think they knew they were going to have to take trees out, they just didn’t divulge it. They didn’t tell us there might be an impact to the trees,” Gilbert said.

The county-owned beach is within the city limits and the county project requires city approvals and permitting.

On June 13, 2018, Sturm sent City Engineer Lynn Burnett an email that said he and Mollanazar would appreciate the city waiving its permit fees.

The agenda item request that Burnett submitted for the June 21, 2018 commission meeting said the estimated permitting fees would exceed $100,000 and delay the project. The commission unanimously approved the county’s request, except for some minimal administrative costs.

On April 10 of this year, Gilbert issued the county a zoning and land use permit that noted the county paid only $500 of the $48,190 that could have been charged in permitting fees, saving the county $47,690.

Vice Mayor Jake Spooner said the county project could have been designed with less impact on the trees had the county obtained a stormwater permit. Instead, county staff chose to place the drainage and paving improvements in the existing footprint of the parking areas and access roads. This alleviated the need for a state-issued stormwater permit.

Spooner questioned the wisdom of completing the project’s first phase when there is now some doubt as to whether county commissioners will approve the project’s proposed second phase.

“The majority of the parking’s still going to be flooded down at the other end,” Spooner said of that potential scenario. “There’s a lot I don’t understand about this.”

Commissioner Ralph Cole said he supports the county efforts to discharge cleaner stormwater into the nearby natural waterways, but he said removing that many trees could negatively impact air quality.

Chappie and Commissioner Randy White said they didn’t recall hearing anything about tree removals when the county project was proposed to the commission.

When contacted earlier in the week, Chappie and Spooner both said they were very disappointed by the county commission’s decision, but they thanked commissioners Betsy Benac and Carol Whitmore for opposing the project as currently planned.

“I had hoped that at the very least the county would have considered the option of cutting down 50 trees and trimming the others,” Chappie said. 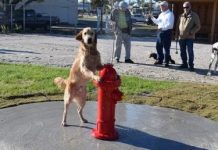