The fact that he’s the sole survivor of Cortez’s 67 World War II veterans is a mystery to Albert Few.

“I don’t know why that is,” he said. “I take good care of myself and the only things that are bad are my vision and my hearing.”

Few is going to celebrate his 98th birthday soon.

“The kids are going to come down from Jacksonville so I expect they’ll plan something,” he said.

Albert Few signed up for the military the day after Japanese planes bombed the American fleet in Hawaii on Dec. 7, 1941.

“I was leaving home to go back to college with my friend when my mother told us to come back because she heard of the attack on Pearl Harbor on the radio,” he said. “I told my friend, ‘Clem, let’s sign up for the Air Force.’ They called it the Army Air Corps back then.”

Few said they took a year to train how to fly in combat. He ended up flying 83 missions in P-40s in North Africa and Sicily for about a year and he came home after the next year, joined the reserve and flew jets after the war. 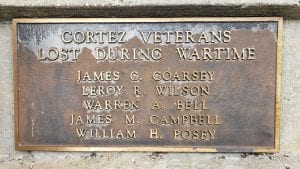 From there, Few became an aerospace engineer and worked for NASA with rocket scientist Dr. Wernher von Braun after the former Nazi surrendered to American soldiers and joined the Allied war effort. In his 30-year career with NASA, he also worked on the Space Shuttle program.

Commission and mayoral seats up for grabs