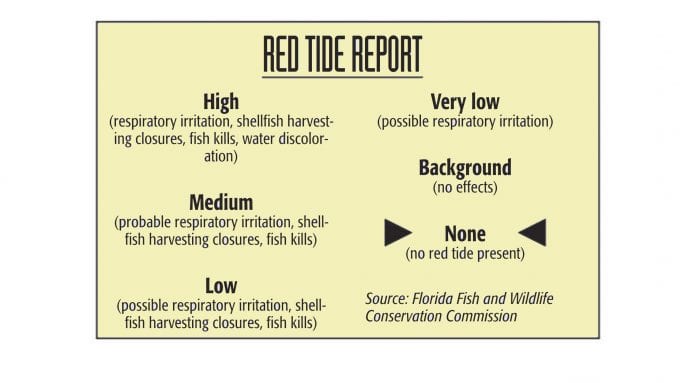 Background concentrations of red tide, or Karenia brevis, have no discernable effects on people or marine life, and are an ordinary component of Gulf of Mexico waters.

FWC reported no fish kills suspected to be related to red tide over the past week.

The red tide bloom began in October 2017 in Southwest Florida. It appeared locally in August 2018, gradually diminishing over the past few weeks to normal levels.

Florida red tide, or Karenia brevis, emits a neurotoxin when it blooms that is deadly to marine life. It can make shellfish unfit to eat and can cause respiratory irritation in people, especially those with asthma, COPD or emphysema.

Scientists say that salinity, currents, temperature and light play a part in the formation of blooms, as do nutrients from Florida’s natural phosphate and limestone deposits, Caribbean seawater brought to Florida’s west coast on the Loop Current, the Mississippi River, Saharan dust blown across the Atlantic Ocean to Florida’s waters, and fertilizer and animal waste runoff.