Our mayor is a morning person. I remember during noise ordinance discussions, her describing sleeping in as 8 a.m., something service workers laughed at and felt compelled to correct. Our chief of police can be more of a night owl. Do you know how I know this? From the time stamps on their responses to my emails.

Both our chief and our mayor have personally intervened on my behalf when I was having issues with a certain rental agent. Both our mayor and our chief have urged me to contact them if I need their help, but because we maintain different schedules, I prefer to use email. I write the mayor at 3 a.m., and she responds at 6:30 a.m. I have likewise received responses to emails from our chief that were written in the wee hours.

I would NEVER call anyone after 11 p.m., with the exception of my friends on the West Coast where it is three hours earlier. I cannot believe the hubris of folks who think it is OK to call after 11 p.m. for a nonemergency situation, especially when they know the person they are calling is most likely in bed, let alone a city commissioner.

I so appreciate living somewhere where I have an opportunity to butt heads with our elected officials. But it does not mean I can abuse this opportunity. Especially when it is about an issue that should be handled with a call to the police, a department that works 24/7.

I support our mayor publicly stating that this is not acceptable. I support our mayor blocking the numbers of folks who abuse it, telling them she will only respond to calls made through the city switchboard, the number to which the calls should have been directed in the first place. Your rant will actually be heard better and responded to better if you call our mayor when she is actually awake. And she will also respond to rants communicated via email rather than over the phone.

With the Sunshine Laws in place, going through official channels is always preferable. And I hope our city commissioners know that. 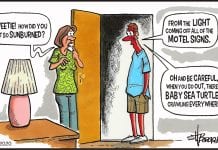