Sousa was contacted by another candidate who claimed to have received a flyer saying the West Manatee Fire Rescue District was supporting Bradenton Beach commission candidates. The claim proved untrue, but there are references to West Manatee firefighters and local firefighters.

“Our employees may get involved individually, and that’s a personal choice, but the West Manatee Fire Rescue District and the district commissioners do not get actively involved in political campaigns or endorse candidates. We’re neutral,” Sousa said.

When asked about his visit with Chappie, Sousa said, “I wanted to convey to him that there is no relationship between the district and the property formerly known as Bradenton Beach Volunteer Fire Station,” which is owned by Bradenton Beach Fire Lodge Inc.

At the time of the merger, the fire hall had long been owned by West Manatee Fire & Rescue Volunteers Inc.

That association still owns the fire hall and the property but in 2017 changed its name to Bradenton Beach Fire Lodge Inc., at the request of Sousa, to avoid confusion with the West Manatee Fire Rescue District. As volunteers, WMFR firefighters continue to care for and use the station for other purposes.

In August, the Venice-based union PAC that represents a dozen fire districts contributed $1,000 each to Maro and Cole’s campaigns.

The PAC also recently spent $584 on a mailer that encouraged voters to support Cole and Maro and said, “West Manatee Firefighters know how important it is to have a voice in our community.”

A door hanger/flyer distributed by Maro and her supporters said, “Join your local firefighters who support Marilyn Maro” and included a disclaimer stating Maro paid for it. 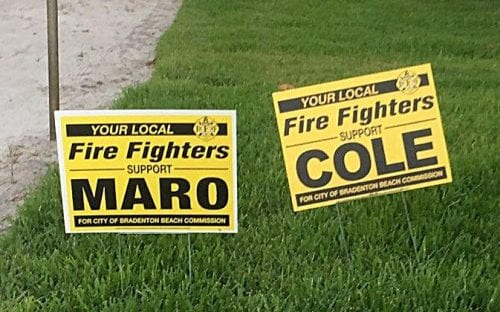 Firefighters have also been walking the neighborhoods in support of Maro and Cole.

When contacted, Local 2546 President Merv Kennell said no taxpayer funds or WMFR resources are used for political campaigns, but firefighters can engage in political activities on their own time.

“All four candidates were invited to interview. It’s my understanding the ones endorsed were the ones who showed up. They were interviewed by the representatives of the membership. They decided to go with those two candidates because they were supportive of the issue that matters to those guys, and that is the property rights,” Kennell said.

For some, the 2001 merger raised questions about the ownership of the hall and Kennell was asked if the endorsements are related to the past desires of Shearon and others to acquire the hall as city property.

“I’d heard there had been prior attempts at getting that property. It’s important that the people getting elected understand and respect those private property rights,” Kennell said.

Buddy Bowen is the local union rep for WMFR firefighters. He said all but four of the district’s 34 or 35 firefighters are Local 2546 members. He also said the fire chief and chief officers cannot be union members.

“We’re employees of the fire department, we’re union members and as association members, we’re also property owners in Bradenton Beach and we feel that we have a stake in the community,” Bowen said.

“Marilyn and Ralph were the only ones that responded to my phone calls. We interviewed them specifically about private property rights in Bradenton Beach. We hope to keep that property and that building for local community events and charity events,” Bowen said.