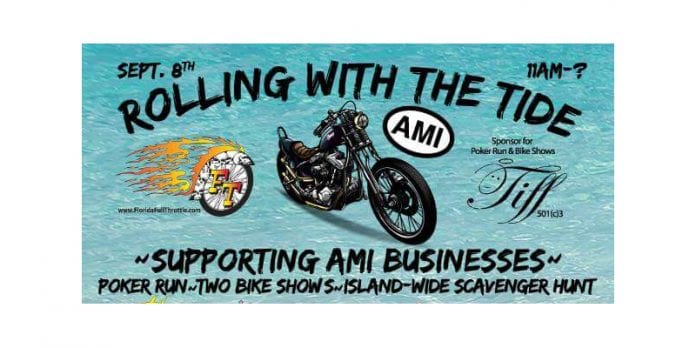 Rolling With The Tide on a Saturday typical refers to a University of Alabama football game, but this weekend it will take on a different and more localized meaning.

Anna Maria resident and Full Throttle Magazine employee Laurie Jo Higgins has organized the Rolling With The Tide event as a means of encouraging local and regional bikers and motorcycle enthusiasts to visit Anna Maria Island on Saturday, Sept. 8.

The purpose of the event is to support the Island businesses and assist in the ongoing efforts to recover from the financial setbacks created by the red tide that began impacting the Island and its businesses in early August.

Rolling With The Tide will feature a $10 poker run, two bike shows, and an Island-wide scavenger hunt.

The poker run will begin at the Anna Maria Beach Cafe at the Manatee Public Beach in Holmes Beach at 11 a.m. and the last hand will be dealt at 4 p.m. at The Freckled Fin in Holmes Beach.

Proceeds from the poker run will benefit To Inform Families First (TIFF), a statewide program longtime Rod & Reel Pier waitress Christine Olsen initiated after her daughter Tiffany and Tiffany’s boyfriend were killed in a motorcycle accident in 2005. It took more than six hours for Christine to be notified of her daughter’s accident.

“With the support of Florida State Representative Bill Galvano, The Florida Department of Highway Safety and Motor Vehicles, and law enforcement agencies, a voluntary Emergency Contact Information program went into effect on October 2, 2006, in the state of Florida,” says the TIFF website, www.ToInformFamiliesFirst.org.

There will be a 4 p.m. bike show at the Freckled Fin and an 8 p.m. bike show in the Drift In and Sport’s Lounge parking lot in Bradenton Beach as part of the Full Throttle Magazine party that will conclude the day’s festivities.