BRADENTON – After one week, Manatee County has ended its contracted canal and waterway cleanup efforts with APTIM and is transitioning to a voluntary “Nets to Neighbors” cleanup and maintenance campaign.

The cleanup services provided by APTIM were costing the county approximately $25,000 per day.

This announcement was made a county press conference on Monday afternoon.

“As of today, the contractor operations ended and the purpose of today’s meeting it to announce the county’s plans moving forward to a neighborhood and volunteer-based solution,” Commissioner Steve Jonsson said, noting that nearly 241 tons of red tide debris had been removed from county parks, beaches and canals.

“We’re transitioning to a program where we will provide nets and buckets to the neighborhood sites that have dumpsters. You and your neighbors can assist by picking up residual fish,” County Administrator Ed Hunzeker said.

Hunzeker was asked what happens if the recently-cleaned canals become filled with dead fish again.

When asked if a cleanup contract could be initiated again, Hunzeker said, “Perhaps.”

On Tuesday, Aug. 21, the County Commission adopted a budget amendment that allocated $750,000 in county funds for red tide cleanup. The commission also authorized staff to apply for a $750,000 grant from the Florida Department of Environmental Protection.

On Monday, Hunzeker said the grant application was made and the county has received a funding commitment but no grant money was received yet.

A press release issued after the press conference stated nets and buckets were taken to the Coral Shores, Wild Oak Bay and Trailer Estates neighborhoods and more would be available at the G.T. Bray Recreation Center on Wednesday.

Not everyone is satisfied with APTIM’s efforts. 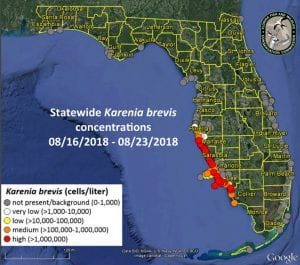 On Monday afternoon, Coral Shores resident Lindy Gallagher said, “They came through my canal one time and we never saw them again.”

When asked if she was satisfied, Gallagher said, “Oh, hell no.”

It appears that APTIM was fired.

When contacted, Jonsson said he spoke with other Coral Shores residents who were pleased with the efforts and he was not given the impression that APTIM was fired.

“The response crew was instructed that recovery activities were going to end at the close of the day and at 4 p.m. the crews started to demobilize,” that report said.

“Did the contractor quit? What am I supposed to tell these people when they call and ask when their canal is going to be cleaned?” Smith asked DeMilio.

“They were let go and we are looking at different strategies, Damon Moore can explain further,” DeMilio responded, noting the county strategy would be readdressed Monday morning.

Moore, the county’s Environmental Program Manager, sent Smith an email that said, “By midday Friday they had worked through the existing large contiguous masses mostly within the areas of Coral Shores, Bowlees Creek and Trailer Estates. With the lack of accessible floating masses and fish rotting to the extent that they could not effectively be removed via the nets, I made the decision that this waterside approach was no longer an effective or wise use of funds at over $25k per day.”

When contacted Monday afternoon, County Information Outreach Manager Nick Azzara said, “From the start of the contractor effort we tried to manage expectations and let residents know that not every fish would be captured. If residents weren’t satisfied with the contractor cleanup, and if they’re not interested in the nets campaign, they’re welcome to call one of the local fishermen searching for work,” he said.

The county website contains a list of local fishermen and others who can be contracted for cleanup services.