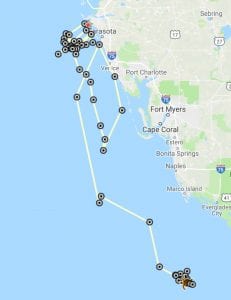 Lingering off the Florida Keys, she has traveled 51 miles since the race began on Aug. 1.

The event is part of the organization’s research project tracking satellite-tagged turtles to determine where and how far they migrate.

Bortie was satellite tagged and released on Coquina Beach on June 19, and is sponsored by the Conservancy, Anna Maria Island Turtle Watch and Shorebird Monitoring, Waterline Marina Resort in Holmes Beach and Bortell’s Lounge in Anna Maria, for which she is named.