It’s four weeks into the adult soccer season, and two teams are atop the leader’s board with three wins and no losses. Josh Sato’s Team Belgium, sponsored by Sato Real Estate, and Ryan Moss’ Team Brazil, sponsored by Moss Builders, so far this summer season cannot be beaten.

The two teams not only have 3-0 records, but the scores of their victories show they are easily the most dominant teams so far.

After seasons of struggling to put together a strong roster on the pitch, Moss may have a championship team. Sato always has shown his mastery in the draft room by picking teams that not only look good on paper, but that also perform on the field.

Team Brazil faced Team Sweden, sponsored by Bins Be Clean. Team captain Nate Welch was sidelined with a back injury and could not take the field for Bins Be Clean.

The squad representing World Cup quarterfinalist Sweden also played without key players Ricky Anderson who went in the second round of the draft and league newbie Brayan Felipe.

With no players on the bench in the heat of the 6:30 p.m. game, Bins Be Clean just could not hold its own on the Island’s pitch against a speedy and organized Moss Builders.

The stats sheets for Team Brazil clearly show the diversity of the squad. With all but one player scoring goals, Moss’ team may just be the team to beat on the way to the championship.

Team Belgium will not let Brazil maintain the top position without a fight. Sato is no stranger to the top of the heap. With a strong goalie, two former college level female soccer players and undeniable strength on the field by the remaining teammates, Sato Real Estate is likely to be one of the top teams at the end of the regular season.

At the mid-point in the season in a league in which all of the squads made the first round of the playoffs, it is still anyone’s championship. Injuries, game suspensions due to misconduct on the field, the heat of the summer games, and absences because of vacations can make the difference for any of the seven teams.

Only time will tell. 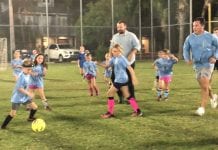