A sixth nest was disoriented in Holmes Beach on July 17, north of 66th Street. A dozen hatchlings in poor condition were discovered, according to Turtle Watch.

HOLMES BEACH – The happiness of discovering that the first sea turtle nests of the season hatched has been spoiled – five out of six nests were disoriented by lights, Anna Maria Island Turtle Watch and Shorebird Monitoring Director Suzi Fox said.

Hatchling turtles that are disoriented by lights or beach furniture can become confused and crawl away from the Gulf of Mexico, dying from dehydration, vehicle strikes and predators.

Lights from tourist accommodations, businesses, condos and residences in Holmes Beach are the probable cause of the disorientation of the five loggerhead nests, Fox said, killing as many as 375 hatchlings, based on the average nest size of 75 in 2017.

Disoriented nests hatched near the:

Since most of the hatchlings have not been found, there is no way to know the number for sure, but volunteers found no tracks leading from the five disoriented nests to the water, she said.

Volunteers estimate that 88 hatchlings made it to the Gulf from the one other hatched nest, based on a post-hatch excavation and count of eggshell fragments.

Turtles on the Island have set a nesting record so far this season, laying 430 nests, nine more than the 421 laid by this time last year, according to Turtle Watch statistics. However, the average number of disorientations over the last 20 years for the entire nesting season, May 1 to Oct. 31, is 18, compared with five already this season.

People have been calling Turtle Watch for days reporting hatchlings in their yards, bushes, in a resort’s fountain and even 10 floating in a pool, Fox said.

The Florida Fish and Wildlife Conservation Commission was notified and instructed Turtle Watch to take the pool hatchlings to the Kukanza Family Hatchling Hospital at Mote Marine Laboratory for rehabilitation.

“We are trying to get them to eat and dive, and when they do, they can be released,” Mote spokeswoman Stacy Alexander said.

Fox filed reports on the disorientations with the state of Florida, Manatee County and the three cities on Anna Maria Island detailing the locations of the lights that appear to have disoriented the turtles, some that previously had been reported to authorities during the 2017 nesting season.

“We want the cities and county to look at what drew them back from the Gulf,” she said. 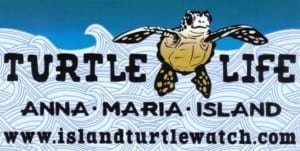 “These are quite grievous,” Charlie Hunsicker, director of the county’s Parks and Natural Resources Department wrote in an email to Fox. “Human behavior can be changed, evolution cannot.”

Simply closing the blinds, drapes or shades on a Gulf-facing window can save turtles, Fox said.

Free window clings reminding people to close shades and turn off outside lighting that is not turtle friendly are available at the code enforcement offices at Anna Maria, Bradenton Beach and Holmes Beach city halls, and at The Anna Maria Island Sun.

Turtle- and people-friendly lighting information is available at the Turtle Watch website.

Turtle Watch at loggerheads with city on benches

Sea turtle tagged, off to races