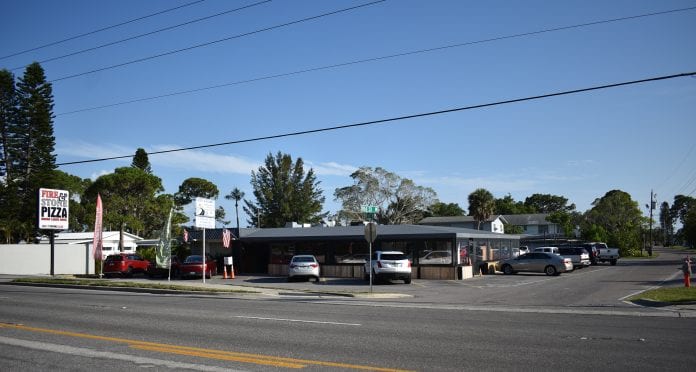 BRADENTON – Street ownership and property rights are the subjects of a lawsuit the owners of Fire & Stone Brick Oven Pizzeria have filed against Manatee County.

In May, attorney John Colton filed the lawsuit on behalf of business owners and property owners Radka and Peter Ross. The lawsuit pertains to their commercial property at the corner of Cortez Road West and 106th Street West.

The lawsuit alleges the county improperly paved the intersection in a manner that impedes on the Ross property and deprives them of the use of a portion of the property – some of which includes the still-in-progress outdoor dining area and the parking spaces along the west side of the building.

According to the lawsuit complaint, the land now known as the Ross property was platted in 1957 and joined the following year by several other properties platted as part of the Battersby subdivision. That platting did not include the county accepting ownership of the street.

The complaint states the county did not build Laurabet Drive, which is now known as 106th Street West.

In 1976, the county arranged for the property owners to pay for road improvements as part of a county participation project that included assessments levied on them to cover their street maintenance costs.

Before the lawsuit was filed, Peter Ross said the anticipated lawsuit was partially inspired by concerns that the county plans to claim ownership of 106th Street West after maintaining it for seven years.

The complaint says the county paved portions of the street in November 2011, which means the seven-year maintenance threshold and ownership transfer could occur this November.

“Plaintiff respectfully requests this court issue a decree ordering county to cease and desist maintenance or occupation of 106th Street West and to further decree county has obtained no interest in the said property,” the complaint says.

The plaintiffs are asking the 12th Judicial Circuit Court to render a declaratory judgment that determines the ownership of the property and the location of any existing property easements. They are requesting a determination that their title to the property is superior to the county’s and seeking a judgment awarding them exclusive possession of the property in question.

The complaint alleges the county’s actions constitute a taking of a portion of private property that is subjecting them to the material and substantial deprivation of the beneficial use of their property.

When asked about the potential lawsuit in April, County Attorney Mickey Palmer said, “This matter has been dealt with in great detail, and my office has no present reason to believe that staff’s approach is flawed in any way.”

After the lawsuit was filed, Palmer said, “We are disappointed that the property owners have chosen to file a lawsuit.  Nevertheless, on behalf of the citizens of Manatee County, the Office of the County Attorney will aggressively defend the lawsuit.”

When discussing these issues before the lawsuit was filed, Ross mentioned additional concerns he and some of his neighbors have. Ross and others do not feel their private street should be used as a primary access road for residents of the adjacent Paradise Bay Estates mobile home community.