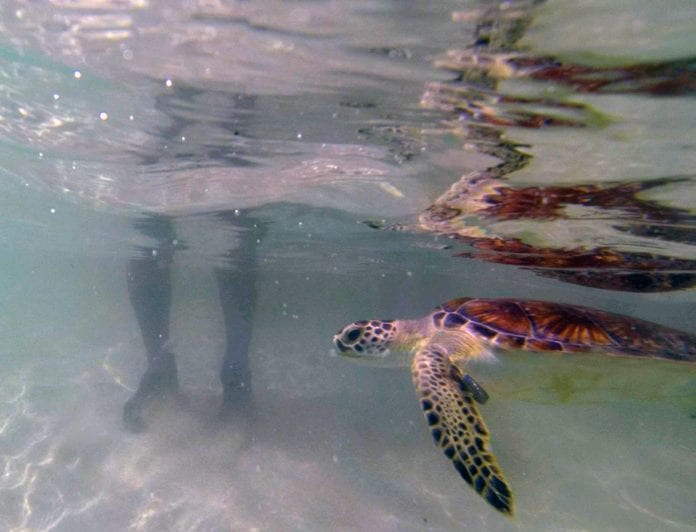 ANNA MARIA – Shoshi, a juvenile green sea turtle, is swimming free in Tampa Bay after a successful rehabilitation and release Thursday morning, May 10 at Bayfront Park.

A fisherman found the turtle in March floating in yellow sludge 15 miles west of Bean Point, the northern tip of Anna Maria Island, according to Mote Marine Laboratory, which rehabilitated the turtle.

Mote Sea Turtle Rehabilitation Hospital staff discovered that Shoshi’s skin was covered in an unidentified orange material, and the plates on its shell were coming off. The turtle received antibiotic eye drops, was given dextrose intravenously, and received subcutaneous fluids until it fully recovered.

Green turtles rarely nest on Anna Maria Island; loggerheads are, by far, the more common local species. Both are on the federal threatened species list.

Turtle season began May 1. No turtles had nested on the Island as of Shoshi’s release date, but one turtle attempted to nest in a “false crawl” in Bradenton Beach earlier that morning, returning to sea without laying eggs, according to Turtle Watch.

If you see a stranded or dead sea turtle, dolphin or whale in Sarasota or Manatee county waters, please call Mote’s Stranding Investigations Program, a 24-hour response service, at 941-988-0212.