TAMPA – Robert Benac, 28, Spencer Heintz, 23, and Michael Wenzel, 21, have been ordered to appear at a felony court hearing on Tuesday, May 1.

The three defendants and their friend, Nick Easterling, were involved in an incident last summer involving video footage of a shark being dragged behind a boat at a high rate of speed. Easterling was not charged with any crimes. 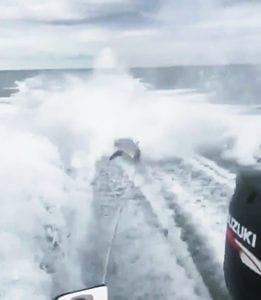 In December, each of the defendants was charged with two third-degree felony counts of aggravated animal cruelty, and those felony charges are the subject of the May hearing. The crimes allegedly occurred in the Gulf of Mexico, near Egmont Key, on June 26, 2017.

Benac and Wenzel were also each charged with one second-degree misdemeanor count of illegal method of taking of a shark. Video obtained by investigators showed Benac shooting with a speargun a shark caught earlier that day. Another video shows Wenzel shooting with a .38 revolver the shark that was later dragged behind the boat he was piloting. State law prohibits taking a shark by any other means than with a hook and line.

Dated March 8, each of the three defendants’ notice of hearing says, “You are hereby notified that the defendant is to appear in person before the honorable Mark Wolfe of the Criminal Court of Hillsborough County in courtroom 62, 6th floor, 401 N. Jefferson St., Tampa, on 5/1/2018 at 9 a.m.” The notices state the defendants are to enter the courthouse through the public entrance at 800 E. Twiggs St. and that failure to appear may result in an arrest warrant being issued by the court, with any bonds posted being subject to forfeiture if the defendants do not appear.

The criminal affidavit pertaining to Benac listed a Sarasota address for him. Benac’s mother, Betsy, is a Manatee County commissioner. The affidavits pertaining to Heintz and Wenzel listed Palmetto addresses. Wenzel’s father, Robert, is a planning section manager for Manatee County. Heintz’s father, Steven, is an attorney with the Heintz & Becker law firm that has offices in Bradenton and Sarasota.