CORTEZ – In its first review of the proposed Hunters Point Resort and Marina, the Manatee County Planning Commission praised developer Marshall Gobuty for its green design, but raised concerns about traffic, the intended use of the cottages, canal navigability, dock access and mangrove preservation.

The commission voted unanimously on Thursday, Dec. 14 to recommend approval of the project, which call for 86 single-story, elevated cracker-style cottage homes; 62 hotel rooms located in two-story lodges; a clubhouse, restaurant, retail space, 17-slip marina, 31-slip parallel docking facility, boat ramp and one slip for an electric water taxi. None of the structures appear higher than 35 feet on the plan.

According to the proposal, Gobuty wants to rezone 6.3 acres to Planned Development Mixed Use to create property-wide consistency, and wants to reduce the waterfront setback from 30 feet to 15 feet.

Located across Cortez Road from the historic Cortez commercial fishing village, the project is proposed for the 18.7-acre property bounded on the east by HH Marina, 12444 Cortez Road W. A former gas station is near the western boundary of the property.

The property is bordered on three sides by a canal Gobuty owns and surrounding property owners use. The canal intersects with the Intracoastal Waterway near the Seafood Shack and snakes around to the marina on Gobuty’s property. The canal also extends east past six canal-side homes along 42nd Avenue Drive West before ending at the Bradenton Boat Club.

The revelation that Gobuty owns the canal surprised some, including Jodi Boyatt. She and her husband live along the canal and had a county-permitted dock and boat lift installed in 2016. During public comment, Boyatt praised Gobuty for his green design, but expressed concerns about 31 parallel slips impacting canal navigation and mangroves.

In response, county staffer Dorothy Rainey said Gobuty owns the canal and has a submerged land lease that requires others to get his permission to build a dock.

Gobuty’s attorney, Caleb Grimes, said, “We don’t believe anybody with a current dock there has anything that is improper. These people have the right to use them as they have historically used them.”

Grimes said the parallel slips would be built waterside of the mangroves, where there are already some access points. Rainey and county staffer Rob Knable said the Florida Department of Environmental Protection (DEP) is the permitting agency for the new docks. Rainey said DEP could allow small swaths to be cut through the mangroves for dock access.

A check with DEP on Friday revealed there is no state-issued submerged land lease.

The cottages would have 484 to 525 square feet of air conditioned interior space, a 500-square foot rooftop deck and 1,200 square feet of lanai decking. The two-bedroom homes are designed to be energy efficient, solar compatible and Zero Energy Ready in terms of potentially producing as much energy as they use. 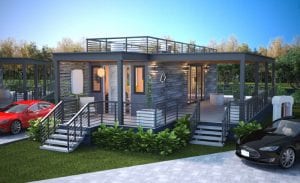 The design incorporates Tesla solar technology and Panasonic smart community technology as part of Gobuty’s goal to create a residential resort community that is self-sustainable in terms of energy consumption. His Mirabella community in Bradenton received a Leadership in Energy and Environmental Design (LEED) platinum rating – the highest rating given.

During public comment, Cortez resident and businesswoman Karen Bell said, “I love that it’s small scale. I love that it’s innovative with the energy-saving programs. I know there’s a lot of people that are upset, but I think this will work well for Cortez.”

Cortez resident Jane von Hahmann asked if the cottages would be used as residences or vacation rentals.

“A comfortable neighborhood is one thing, but putting people in there elbow to elbow gets ridiculous. It looks like a trailer park without wheels,” he said.

Planning Commissioner Al Horrigan Jr. said, “I like what they’re talking about, but we have an obligation to be honest. Is this a hotel or a single-family subdivision?”

“The residential units are designed to be sold to residents. We’re not going to restrict them if they want to rent,” Grimes said. “They are designed for those people who want something smaller to live in. They’re also designed for someone who wants to come and stay for a period of time.”

Commissioner Mike Rahm said, “I think this is a really cool project, but let’s talk about the 800-pound gorilla in the room – the traffic.”

Representing Gobuty, Steve Henry estimated 600 cars would go in and out of the gated community daily.

The Manatee County Board of County Commissioners is scheduled to review the plan on Thursday, Jan. 11.